If you’re thinking of getting a husky, you’re probably wondering if it’s the type of dog that will constantly bark, day and night.

There’s nothing worse than a dog that barks for no clear reason throughout the night. Let’s look at how huskies are different from other dog breeds.

While huskies can bark, most almost never do. It’s rare for a husky to have a barking problem. Barking is usually a territorial act and huskies aren’t very territorial.

Huskies make terrible guard dogs because they’re unlikely to bark at strangers. Instead of barking, huskies love to howl.

Huskies are generally very quiet dogs. While barking is rare, they can be quite vocal at times by howling or “talking”.

Let’s look at why huskies don’t typically bark and what they do instead. 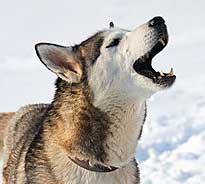 To understand why huskies usually don’t bark, let’s look at why dogs bark in general. Barking is only one type of vocal communication dogs can use. Different breeds use barking for different reasons.

Some dogs bark for territorial reasons. Huskies aren’t very territorial, so they have no reason to use barking to let you know about strangers or potential intruders.

This is why huskies make terrible guard dogs – they simply don’t have the instinct to bark when a stranger approaches your property.

Some dogs use barking to show affection or to greet you. Some huskies will bark when they’re excited to see you, but it’s not very common. It’s more common for your husky to run around like crazy.

When I get home, my husky will cut a few laps around the backyard before coming over to me for a pat. Not a single sound comes out of her mouth.

Some dogs use barking to show distress. For example, my brother-in-law’s Border Collie will constantly bark if she hasn’t had enough exercise. Huskies are more likely to whine than bark.

If you forget to feed your husky at the right time, you’re likely to be met with whining and howling, but no barking.

Huskies don’t usually bark because they tend to use different ways of communicating with you such as howling, whining, or speaking.

While some huskies do bark often, it’s rare. You’re more likely to have a husky that never barks.

When Husky Puppies Try To Bark

A good way to understand why huskies don’t usually bark is to see what happens when a husky puppy tries to bark. They find it hard to make short sounds and find howling and whining much easier.

Check out the below video and notice how easily the puppy starts to howl after trying to vocalize:

It’s clear from the above video that howling is in a husky’s nature. While husky puppies eventually learn how to bark as well, most continue to choose to howl as their main form of communication.

Why Do Huskies Howl

It’s unusual for a husky to bark, but it’s normal for them to howl.

The long sustained howl is easier for the other wolves to pinpoint where the sound is coming from than a bark.

While huskies are domesticated, they still have their ancient howling instincts. They evolved with howling as their main form of communication, so they continue to use it today.

It’s common for huskies to howl when they’re bored, when something is wrong, or when they want you to come and play. While other dog breeds will bark for all these reasons, huskies will howl.

Find out more about howling huskies in this article.

Why Do Some Huskies Bark

If you have a husky that barks regularly, you’ll either think that this article is completely wrong, or something is wrong with your dog.

Fortunately, there’s nothing wrong with your husky if it barks or if it doesn’t howl.

Some huskies bark as their main form of communication. There’s nothing wrong with your husky if it barks, it’s just uncommon. While howling and talking is the usual way huskies communicate, there will always be some huskies that don’t use these methods.

Every husky has it’s own personality.

For example, my first husky was a howler. He would only sometimes talk and almost never barked. The husky I have now does regularly howl, but she whines and talks as her main method of communicating with me.

My wife calls her a cry-baby because of how much talking and whining she does. She only barks on rare occasions when she’s really excited.

While both of my huskies howled and talked with only rare barking, your husky may be different.

While you may have a husky that barks as the main form of communication, it’s rare. There could be another reason for the barking. Huskies can bark as a result of stress, anxiety, or loneliness.

For example, if you get home and your neighbor tells you your husky has been barking all day, that’s a sign something may be wrong.

If you notice your husky barking, take note of the situation. What has happened leading up to this moment and what do you think the barking means?

For example, if you just got home and your husky is jumping around and barking, that’s just a sign that he’s excited to see you and wants to play.

But for example, if you notice that your husky is barking at the same time every day, take a look at the husky’s routine to find the problem. It could be as simple as not getting enough exercise and the husky is getting frustrated by this point in the day.

It can be difficult to identify problems, so if you notice your husky start to bark, take note of the situation, body language, routine, etc. Write everything down so you can refer to it later on.

If it’s a problem, over time you’ll be able to pinpoint what is causing it and deal with it. By writing notes down every time your husky barks, you’ll pick up on any patterns or triggers.

Do huskies bark at strangers? No, huskies won’t bark at strangers. Huskies tend to be friendly and are more likely to greet an intruder with a wagging tail than bark at them. My husky sees each stranger as a new friend to play with. She would be a terrible guard dog.

Why does my husky bark at me? While barking is rare for huskies, you may find your husky barks at you. Huskies sometimes do this to let you know they want to play. The only times my husky has barked is when she wants me to chase her around the backyard. If your husky is barking at you, pay attention to the context and situation.

Why does my husky bark a lot? It’s rare for a husky to bark as the main form of vocal communication. This can happen if a husky grows up with other dog breeds. Taking your husky to play with other huskies could be all it takes for your husky to learn how to howl and talk.