One of their most beloved features, Huskies are known for their distinctive-looking almond-shaped eyes, which can be seen in a variety of colors.

They are most commonly seen with either ice blue eyes or deep brown eyes, but sometimes even this varies.

Some Huskies have one eye of each color (bi-eyed), or more rarely, eyes that have a mixture of both blue and brown in them (known as parti-colored).

While there are other dog breeds that also have a multi-hued range of eye colors (like Border Collies and Australian Shepherds), Huskies are most commonly known for this phenomenon.

Both blue and brown eyes are normal for Huskies and rarely represent any eye problems or illnesses.

Table of Contents show
1 Husky Eye Color Chart
1.1 Blue Eyes
1.2 Brown Eyes
1.3 Bi-Eyed
1.4 Parti-colored Eyes
2 Do Husky Eye Colors Change?
3 When Do Huskies Eyes Stop Changing?
4 Huskies with Different Colored Eyes
5 Are Blue Eyes Bad for Huskies?
6 Husky Eye Color FAQ
6.1 What percentage of Huskies have different colored eyes?
6.2 How can I tell if my Husky will have blue eyes?
6.3 Why are Huskies eyes so blue?
6.4 Are Huskies the only dogs with blue eyes?

Here are the main types of Husky eye colors and how often they occur. While some people may think that almost all Huskies have blue eyes, the reality is very different.

Here is a chart comparing the most common types of Husky eye colors:

Let’s go through each eye color and how likely a Husky is going to grow up with these colors.

Huskies with blue eyes are common, with approximately 40% of the breed known to have them. The blue shades can range from light icy blue to deep blue, with greys and greens in between. More often than not, blue-eyed Huskies have a ring of dark skin around their eyes which help to deflect sun and snow glare and reflection.

These blue eyes are often quite striking to see and most people are familiar with this characteristic of the breed.

Equally common, at approximately 40%, are brown-eyed Huskies. These browns can range from amber to dark chocolate brown and are often very vibrant.

My first Husky had dark brown eyes, while Sasha has a lighter brown color (middle photo below).

Some people think that brown-eyed Huskies are not purebred because of their eye color, but the American Kennel Club has recognized this variation as a breed standard.

This is when your Husky has eyes of two different colors, as the name suggests. Huskies that are bi-eyed usually have one blue eye and one brown eye. Approximately 15% of Huskies are bi-eyed, which makes them quite rare, but there is no evidence to suggest that a Husky with two different colored eyes will have problems with their eyesight.

There are also a few other dog breeds that share this bi-eyed trait.

Even rarer than bi-eyed Huskies, at approximately 5% of the breed, are Huskies that have parti-colored eyes. These eyes have a mixture of both blue and brown in them, often blended together.

Huskies with parti-colored eyes can look jarring because it’s not something we’re used to seeing. Some people may mistakenly think that it’s a sign of a health problem, due to how strange a parti-colored eye can look.

As you can see from the above photos, a Husky can have both eyes parti-colored or only one eye.

All Husky puppies are born with blue eyes. It isn’t until they are about 5-8 weeks old that their eye color may start to change.

This color change depends on their genes and the concentration of melanin (pigment of the skin, hair, and eye) in their bodies.

The below photo shows Sasha’s eyes when she was a puppy. You can see that they’re a greyish blue. 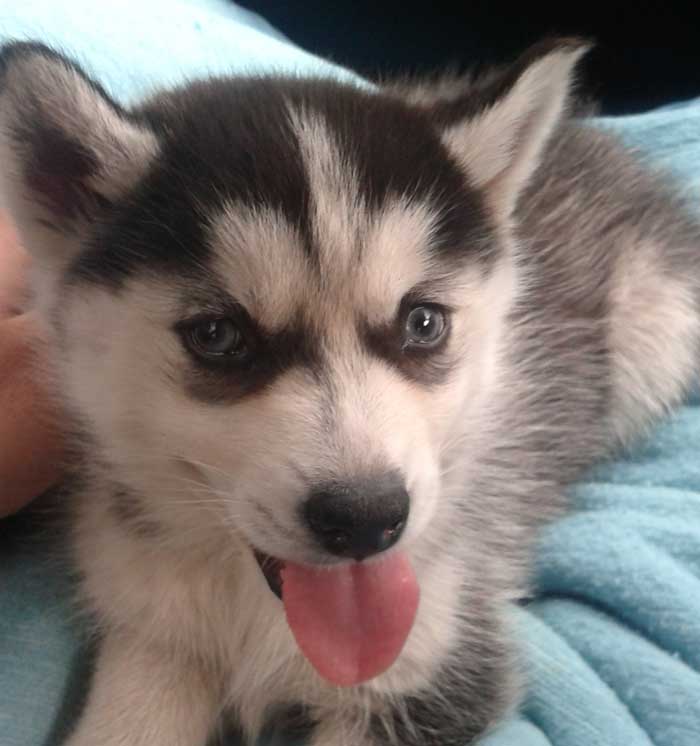 As she grew up, this color gradually changed from the greyish-blue to light brown as you can see in the below photos: 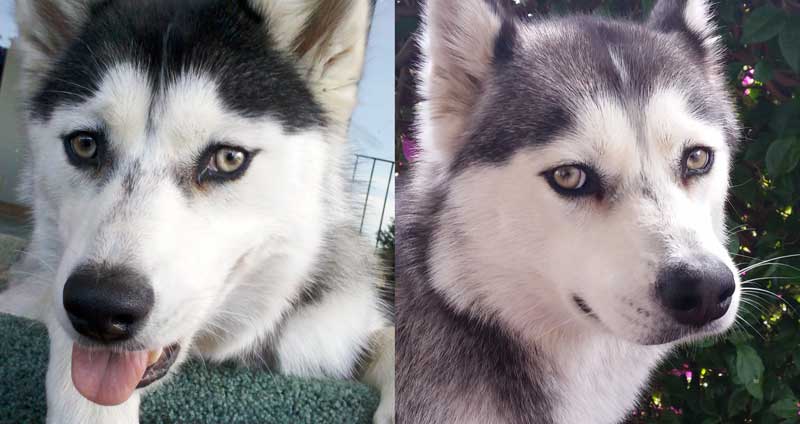 Some Husky’s eyes will change to brown, some will stay blue and some will end up with bi-colored or parti-colored eyes.

When Do Huskies Eyes Stop Changing?

A Husky’s eyes can start changing from about 5-8 weeks old and have usually settled into their permanent color by the age of 12-16 weeks.

However, there have been some Husky owners who have noticed changes of color until as late as 6 months old.

If you notice your Husky’s eyes changing color after this age, it might be a good idea to take them to your local vet, just in case they have developed an eye problem.

As you have seen, Huskies eyes can come in a wide range of colors, from icy blue to deep brown, but let’s look more closely at bi-colored eyes.

This phenomenon is also known as heterochromia and can be found in other dog breeds and even some humans. Caused by a genetic mutation, those with heterochromia usually have one blue eye and one brown eye. 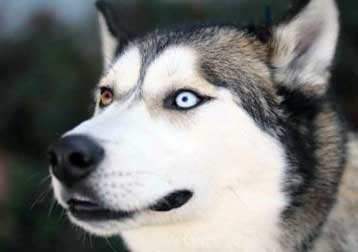 The different colored eyes are determined by the concentration and distribution of melanin (which is a natural pigment that gives us our skin, hair and eye colors).

This is a hereditary condition. While it is rarer to see Huskies with this type of eye color (rather than two eyes of the same color), it is still normal.

Despite what some people may think, having bi-colored eyes does not mean that your Husky will have problems with their eyesight in the future. It is also not an indicator that your Husky is a mixed-breed.

Are Blue Eyes Bad for Huskies?

Blue eyes can be a bad sign for other dog breeds, but not for Huskies.

All Husky puppies are born with blue eyes, which is a dominant trait in the breed. Between 5-8 weeks old, their eyes might stay blue, change to brown, or become bi-colored or parti-colored.

According to research by Adam Boyko and Aaron Sams of Embark Veterinary Inc, there is a reason why some Huskies have blue eyes in comparison to other dog breeds. They found that there is a genetic mutation near a particular gene that leads to decreased pigment production in the eyes- making them appear to be blue.

In many other breeds, if the dog does not naturally have blue eyes and they start to appear blue, this could be an indicator of eye disease or some other problem. This is when you should be worried about the color of your dog’s eyes.

If your Husky has blue eyes, there should be no cause for concern.

What percentage of Huskies have different colored eyes?

How can I tell if my Husky will have blue eyes?

There are no guarantees that your Husky will have blue eyes. While all Husky puppies are born with blue eyes, some of them will change as they get older, and you may end up with a Husky that has brown, bi-colored or parti-colored eyes. If your Husky puppy’s eyes start to turn a murky dark blue between 5-8 weeks old, there is a chance that they may end up having brown or amber eyes as adults, rather than blue eyes.

Why are Huskies eyes so blue?

Are Huskies the only dogs with blue eyes?