One of the things that regularly reminds me that I own a husky is the howling. Huskies don’t tend to bark like other dog breeds, but they are quite vocal with howling and “talking”.

Huskies howl as their main form of communication thanks to their wolf ancestors. Howling is easier to detect in the distance than barking, making it easier to find each other.

Huskies continue to howl, whine, and “talk” today because of their ancestors.

While domesticated huskies no longer need to howl to communicate through snow and forest, there is a lot we can learn as owners about why huskies howl and what they mean when they howl.

Let’s take a closer look to understand more about the way our huskies talk to us. 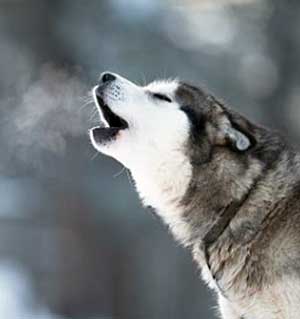 A howling Husky is one of the key behaviors Husky owners expect to see. Find out other key behaviors you can expect from a Husky in this list of 15 key Husky behaviors.

Table of Contents show
1 Why Do Huskies Howl Like Wolves
2 Why Huskies Howl at Sirens or Crying Babies
3 When Do Huskies Start Howling
4 What Does A Husky’s Howling Mean
5 How To Deal With Excessive Howling
5.1 Understanding context
5.2 Change your husky’s routine
5.3 Teach your husky to howl on command

Huskies howl like wolves because they’re closely related to wolves. One look at a photo of a husky next to a wolf and it should be no surprise that they are closer cousins than other dog breeds.

A good way to understand why huskies howl is to to look at how wolves howl in the wild.

When a wolf is separated from the pack, howling is the best way to call out to the pack. Barking might be loud enough, but the short sounds make it hard for other wolves to pinpoint where the bark came from.

The long sustained sound of a howl carries through the air and makes it easier to pinpoint.

Think about why large ships use long fog horns instead of short beeps. When you hear a fog horn, you can quickly identify which direction it came from.

It’s the same with howling, the long sound of a howl carries through the wind and allows other dogs to identify where it came from.

The reason huskies howl instead of bark is because the sound of a howl can travel further to reach other huskies.

The above photo shows how closely related wolves and huskies are. When a husky howls, there’s no mistaking the connection with wolves.

Why Huskies Howl at Sirens or Crying Babies

While there’s no surprise that if your husky hears another dog howling, he will join in. But it’s not just other dogs that can trigger your husky.

If you hear a siren in the distance, your husky will probably start whining and howling like in the video below.

Huskies howl at sirens as an instinctual response. Their instincts hear the siren as another husky in the distance calling out to them, so they return the call.

This is a great example of a husky’s instincts kicking in. Imagine a lost husky howling in the distance to call out to the rest of the pack. When other huskies hear this, they will return the howl so the lost husky can try and locate the pack.

While we know an ambulance’s siren is artificial, huskies don’t understand such things. To them, the distant siren could be another husky calling out for help.

A more interesting example of a husky’s instincts kicking in is when they hear a baby crying. It’s a bit harder to understand why huskies howl and “talk” when they hear human babies crying, but they do as shown below:

Another explanation could be that the husky recognizes the crying as a sound of distress and howls in response.

While we’ll never know what actually goes through a husky’s head when they hear a baby crying, there’s plenty of reason to believe the husky recognizes the crying as distress.

It’s also possible that your husky howls at a crying baby to get your attention. Your husky’s howl might mean “come quick, the baby needs you!”

It’s common for husky owners to find that a howling husky does wonders to soothe a crying baby.

When Do Huskies Start Howling

Huskies start howling surprisingly early as puppies. Husky puppies find it much easier to howl, whine, and talk than to bark. While a puppy’s howl doesn’t have the same power and resonance as an older husky’s howl, there’s no mistaking it.

As mentioned above, sirens, crying babies, other dogs, or even a harmonica can be enough to trigger a husky puppy to try and howl.

The below video show a 7 week old husky puppy howling in response to other howling. It’s a perfect example of a husky’s instinct to howl as part of a community.

While 7 weeks sounds young, I’ve seen much younger puppies attempt to howl. While they couldn’t get the sound right, they lifted their heads the same way other huskies do when howling.

What Does A Husky’s Howling Mean

Huskies howl for many different reasons in response to different situations. This makes it hard to identify why a husky might be howling and what it means.

Huskies may howl as a result of boredom, loneliness, lack of attention, hunger, playfulness, excitement, or many other reasons. To understand what the howl means, look at the context.

For example, if you just get home and your husky starts howling, it’s a sign of excitement. They’re not alone any more and want some attention from you.

But if you’re just leaving for work and your husky starts howling, the meaning behind that howl is clearly different.

A husky’s howl doesn’t have one clear meaning. Howling is a form of communication and can be used for many different situations.

How To Deal With Excessive Howling

Howling is only one form of communication huskies can use. Some huskies use howling as their main form, while others use “talking”, whining, or barking (although not as common as explained here).

While it’s common for huskies to use a mix of all these communication methods, some huskies will howl in every situation.

While many huskies are very quiet and only howl or talk on occasion, some are extremely vocal. If your husky howls a lot, there are a lot of different ways you can try to deal with it.

The first thing to do is to try and understand the context of the howling. Does the howling happen at certain times of day or night, or is it throughout the day?

As an example, my husky used to howl every night when we would sit down to eat dinner. We would feed her before we ate, so it wasn’t that she was hungry.

But when she would finish and see the rest of her family (us) sit down to eat without her, it became clear she was howling because she felt she was missing out.

A simple change to her routine was enough to stop the howling.

If your husky howls constantly throughout the day or night, it’s a good idea to try and eliminate any possible concerns. For example, huskies can howl when they’re bored or under exercised.

Even if you think you’re giving your husky enough exercise, try really giving her a good workout over a few days to see if her behavior changes. Change your routine and do things completely differently for a few days.

This is a good way to find out if the howling is a response to her environment.

If the howling stops or drops off, you know that the howling is a response to your husky’s routine or exercise levels.

If the howling doesn’t stop after different attempts of changing your husky’s routine or giving her a good exercise, at least you can rule out causes for concern.

Teach your husky to howl on command

The most common approach husky owners take is to try and teach your husky a command to stop howling. This usually gives mixed results.

Instead of trying to teach a command for your husky to stop howling, a better approach is to first teach your husky to howl on command.

By teaching your husky to howl on command (eg: “Sasha, speak!”), you’re opening a door to teach another command to not howl. This might sound counter-intuitive, but it’s a common approach dog trainers take to stop dogs barking.

While it’s very common for huskies to howl as their main form of communication, many “talk”, whine, and bark. Find out more about barking huskies in this article.