If your Husky has been eating grass or dirt, you might be worried about this behavior.

Should you be concerned? This isn’t normal behavior for a dog, is it?

Eating grass is common with Huskies as well as most dog breeds and there are several reasons for this including boredom, nutritional deficiencies, or an upset stomach.

This short guide will look at how to deal with this problem with different solutions you can try to stop your Husky from eating grass or dirt.

Why Do Huskies Eat Grass

There are several reasons that Huskies eat grass and these include boredom, a nutritional deficiency, or to make themselves throw up.

Huskies eating grass because of boredom

Some Huskies might eat grass because they are bored. Huskies are active and inquisitive dogs by nature, so if they are bored, they will find their own ways to entertain themselves.

To alleviate their boredom, Huskies will try to find something to do to stimulate themselves. Most Huskies who are outside will find that they have an abundance of grass at their disposal, and this can provide them with the perfect opportunity to fill in their day and give them something interesting to do.

Besides rolling around in it, their curiosity about the taste of grass might lead to them chewing it.

One way you can try to prevent this from happening is by ensuring that your Husky has plenty of exercise or stimulation so that they are too tired to consider the grass as anything more than something to walk on.

Check out some toys to keep your Husky stimulated in this guide. 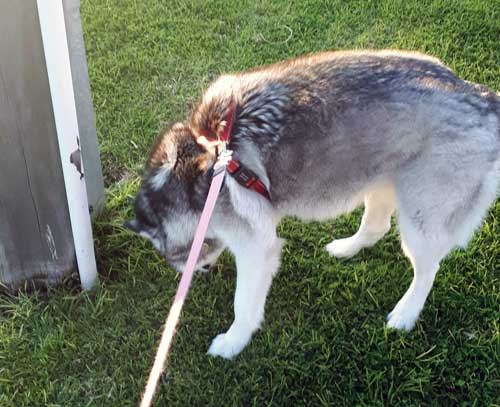 Some Huskies might eat grass because their diets are lacking in some nutrients. Before they were domesticated, dogs used to get some of their nutrition from eating grass, which was readily available to them.

Nowadays, Huskies can rely on their owners to provide them with a healthy diet that includes all their nutritional needs. But if a Husky feels that their diet is lacking, they might fall back on this inherited trait and start chewing on grass to fill this deficiency.

You can find a comprehensive list of foods that Huskies can and cannot eat here.

Huskies eating grass to make themselves throw up

Some Huskies might eat grass to make themselves throw up.

Many dog breeds, including Huskies, are known to eat grass when they have an upset stomach. The action of eating grass often makes them throw up, alleviating the discomfort.

The best way to stop your Husky from eating grass to throw up is to try and prevent them from needing to regurgitate in the first place. Make sure their diet is sufficient so that they don’t experience stomach discomfort, and feel the need to eat grass to alleviate it. 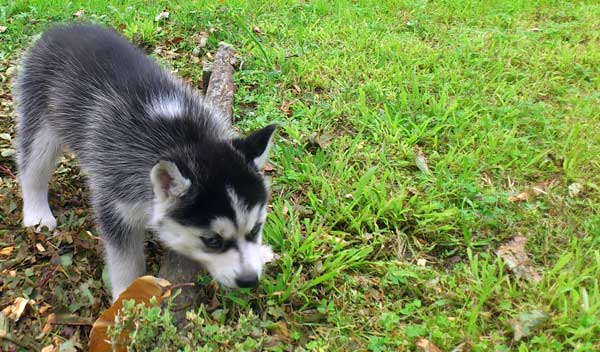 Why Do Huskies Eat Dirt

The reasons a Husky might eat dirt are very similar to the reasons why they might eat grass. They might be bored, have a nutritional deficiency, want to soothe an upset stomach, or might even smell something enticing in it.

Have a read through the below reasons and look out for signs and symptoms to figure out how to deal with the behavior.

Huskies eating dirt because of boredom

Some Huskies might eat dirt because they are bored. If you provide your Husky with enough mental stimulation and physical activity to keep them occupied and entertained, they will be less likely to seek out new ways to alleviate their boredom. 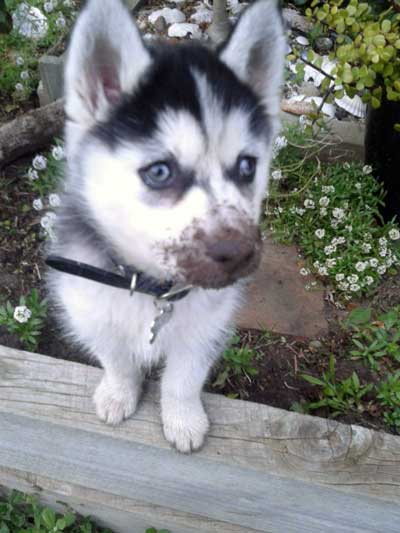 To ease this boredom, here are some fun games to play with your Husky.

Some Huskies might eat dirt because their diets are lacking in some kinds of nutrients. If your Husky isn’t getting everything their bodies require through the food that they eat, they might try to fix the problem themselves by eating other things that are available to them, including dirt and grass.

Eating dirt and grass was a common practice for many dog breeds, including Huskies, before they were domesticated. To avoid your Husky reverting to this inherited trait, make sure that their diet is full of nutrient-rich foods.

If you are unsure what you can add to your Husky’s diet, here is a list of foods that your Husky can and cannot eat.

Some Huskies might eat dirt to soothe an upset stomach. While some dog breeds are known to eat grass to make themselves throw up and alleviate stomach discomfort, others are known to eat dirt instead to bring about the same result.

To try and prevent your Husky from eating dirt in this instance, make sure that their diet is sufficient so that they are less likely to experience stomach discomfort.

Huskies eating dirt because they smell something enticing

Some Huskies might eat dirt because they can smell something, like food, that may have dropped into it.

This is actually a common scenario, especially when you have had a barbecue and pieces of food might have dropped into the dirt beneath it.

The smell will be enticing to your Husky, who will want to seek it out. Depending on the size of the food morsel, it might be difficult for your Husky to pick up with their mouth, and so they will also end up eating the surrounding dirt as they try to get to the food.

This is a very normal reason for your Husky to eat dirt, and is nothing to be concerned about. If you are worried and want to try and prevent this from happening, just make sure that you keep the area around your cooking clean so that your Husky isn’t tempted to look for food in the dirt.

Is It Bad For Your Husky to Eat Grass or Dirt?

While it isn’t bad for your Husky to eat grass or dirt, you do need to be careful that there is nothing on or in the grass or dirt that could harm them. This includes insecticides or other poisons, because, if ingested, these could make your Husky very sick.

Your Husky eating the grass or dirt on its own shouldn’t be harmful, but preventing them from eating it would be a lot better for their health.

How to Stop Your Husky From Eating Grass or Dirt

There are several things you can do to stop your Husky from eating grass or dirt.

Make sure that your Husky is mentally stimulated and has had plenty of exercise so that they do not try to eat grass or dirt to relieve their boredom. 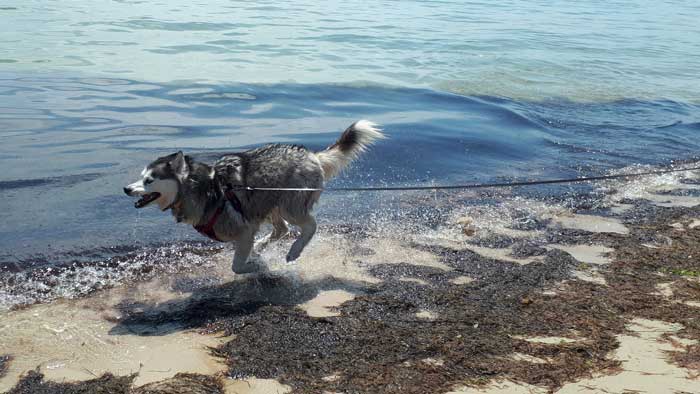 Ensure that their diet includes all the nutrients that they need, and does not include anything that would upset their stomach so they feel the need to throw up to feel better.

If you are eating outside, be aware that any dropped food will be enticing to your Husky, who may end up eating the surrounding grass or dirt when they try to pick up the dropped food with their mouth.

It might also be a good idea to section off any large sections of dirt in your yard, in case your inquisitive Husky decides to go and check out the area.

If your Husky is eating grass or dirt because they are not getting enough nutrients in their diet, and you are not sure what you can do to fix this, have a look at our list of foods that Huskies can and cannot eat.

If your Husky is eating grass or dirt because they are bored or not getting enough exercise, here are some ideas about fun games you can play with your Husky.