Thinking about getting a husky as a pet is a big decision to make. Having an understanding of what huskies are like before you get one can save you a lot of headaches and confusion.

Huskies generally make excellent pets due to their friendly and gentle temperament. They are great as a family pet and a quite intelligent breed.

There are also a lot of myths and misunderstandings about huskies, so in this article, I’ll explain what it’s like to own a husky and what to expect from them as a pet.

Here are some basic facts to consider when thinking about getting a Husky as a pet.

To really understand what Huskies are like as pets, read through the rest of this guide and I’ll try to give you a realistic idea of what they’re like.

Are Huskies Good With Kids?

If you’re looking at getting a husky and you have kids, it’s important to consider what huskies are like with kids.

While every husky has a different personality and will behave differently depending on training, huskies are generally excellent with kids.

The gentle and friendly temperament of huskies become clear when you see a husky playing with kids.

Of course, dog owners should always exercise caution when allowing any dog to be in contact with children, but generally speaking, Huskies are excellent with kids.

The first way is the boundless excitement they show when they see you. This is very similar to other dogs. A Husky will jump around like a lunatic when they see you and mine loves to run around full-speed for at least a couple of minutes.

Another common sign of affection Husky owners notice is the way Huskies want constant contact from you.

If I’m sitting next to my Husky and I lift my hand off of her, she will immediately reach for my hand to pull it back on her.

The below video perfectly demonstrates the behavior I have noticed in my Huskies:

I still haven’t decided whether this is a true sign of affection or just a selfish need for belly rubs. But a lot of Husky owners recognize this same behavior in their dogs.

Do Huskies Play With Other Dogs?

I’ve noticed a common behavior with every Husky I’ve spent time with. They all loved the sight of any other dog and would greet each one as if they were long-time friends.

While walking my Husky, if she would encounter another dog, she would happily go up to the dog to play. Even if that other dog was clearly hesitant or started barking at her, she would still see it as a friend.

I’ve never seen my Husky show any negative behavior towards other dogs or even towards other people. Every Husky I’ve met from other owners seemed to show this same openness towards strangers. 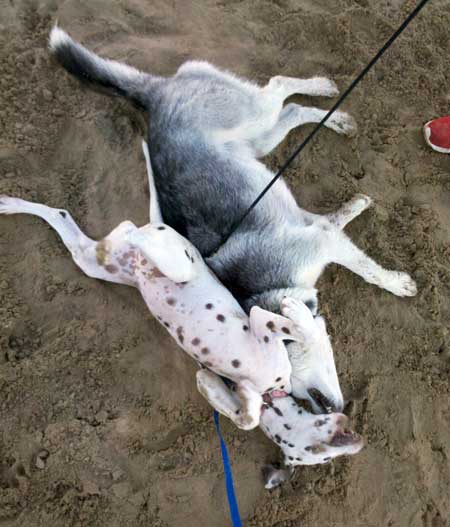 Of course, like any dog breed, some Huskies may show behavioral issues with other dogs, but generally speaking, Huskies are great with other dogs and love to play with them.

This means if you already have a dog and are considering getting a Husky to join your family, you’re unlikely to have any problems with your Husky not getting along with your other dog. Whether your other dog accepts your Husky is a different story.

Can Huskies Be Left Alone?

If you’ve been thinking about getting a Husky, you’ve probably seen photos like the one below and are concerned about all of the stories of Huskies causing chaos and ripping up furniture when left alone. The problem with all of the photos and videos shared online is that they make it seem as if this is normal Husky behavior. It isn’t. The above photo is completely my fault for not taking proper care of a growing Husky puppy.

This is an important point to make: Huskies can be left alone if properly taken care of.

A well-exercised Husky won’t rip up furniture or cause chaos. That only happens when the Husky hasn’t been properly exercised or mentally stimulated.

The ripped-up couch you see in the above photo is completely due to me not exercising my Husky enough. I simply forgot how much extra attention a Husky puppy needs and the above photo is the result. Any time you see a Husky owner share photos of a dug up backyard, ripped furniture, or other chaos, it’s a direct result of not properly exercising and stimulating their Husky.

Over the years I’ve noticed my Husky’s behavior when she thinks I’m not at home. She will spend most of the time sleeping and has never displayed signs of frustration such as digging holes or causing chaos (apart from the one incident as explained above).

Here is what happens when a Husky thinks you’re away from home and they’ve been properly exercised and mentally stimulated: 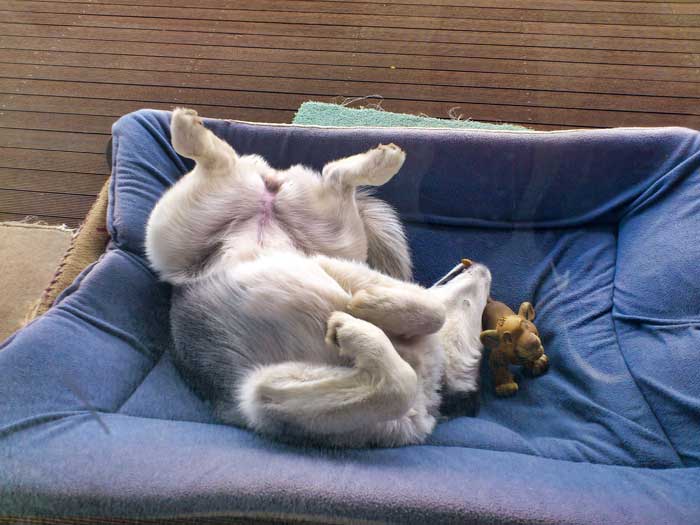 If you have a Husky that can’t seem to be left alone without causing problems, that’s a sign that the dog isn’t getting enough exercise or attention when you are at home.

As I explain in the article on How much space Huskies need, it is a mistake to think that a large backyard is all a Husky needs. Huskies only care about their backyard if you’re in it. If you’re not home, a big backyard is meaningless.

The point is that if a Husky receives enough exercise and attention when you are at home, they can be perfectly happy to be left alone. If they’re not getting enough exercise or attention, being left alone gives them an opportunity to vent their frustration in any way they can.

Not a chance. Huskies are absolutely hopeless guard dogs.

A typical Husky owner will tell you that an intruder is more likely to be licked to death than have any real issues with a Husky.

My female Husky has shown zero aggression or negative behavior against strangers so far in her life. She sees every stranger as a new friend to play with.

My male Husky I had while growing up was a bit more protective and hesitant with strangers. But even he never made a peep when a courier would drop off a parcel or a stranger would come over.

Huskies are terrible guard dogs when compared to other breeds. If you’re considering getting a Husky to be a guard dog, look for a different breed.

Huskies are quite intelligent, but this intelligence isn’t as good as it might sound and can cause problems if not properly dealt with.

While we tend to think of high intelligence in dogs as a good thing, with Huskies it isn’t so straight forward.

A Husky’s high intelligence mixed with their independence creates stubbornness. Huskies can be painfully stubborn. I talk about this in my list of 15 Things Only Husky Owners Will Understand.

Huskies understand commands and are intelligent enough to decide whether they want to follow them or not. Many people mistakenly see this as a lack of intelligence, but when a Husky doesn’t follow a command you know they understand, it’s their stubbornness showing.

In the below photo, I have called her to come up the stairs to meet me. The below face says “I heard you, but I’m not moving”. 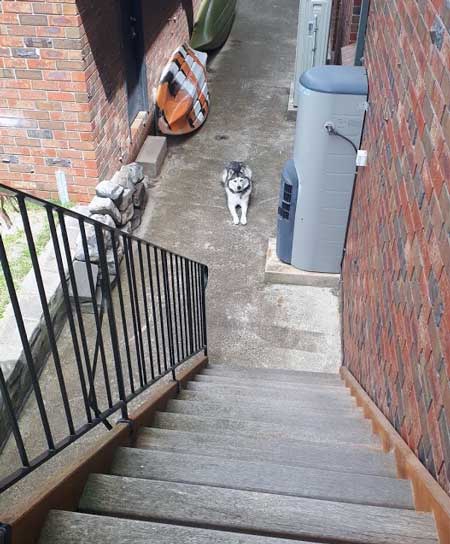 My family joke that sometimes when we give her a command, we can see her mind thinking “what’s in this for me?” as she decides whether she chooses to follow the command or not.

While experienced trainers can overcome this stubbornness, it can become an issue for other owners. The lack of intelligence or independence in other dog breeds makes them easy to train and follow commands. Because Huskies are intelligent, they can assess your commands and decide whether or not to follow them. This makes them stubborn and it makes your job a bit harder.

While this might sound bad, it simply means you need to have a better understanding of training techniques and instilling good behavior in your Husky.